Sannidi Academy of Music and Arts, (SAMA) a nonprofit organaisation established in the year 2011 by carnatic musician T.R. Sundaresan. Sannidi, helps young talents to come together and also provides them a platform for team work, learning and performing. Sannidi Academy of Music and Arts welcome all like minded musicians and artists to come forward and be a part of its future endeavors.

Whatever one’s personal background and aspirations may be, Carnatic music remains a quest for undiluted aesthetic experience (rasa). Three basic concepts are essential. Read the brief introduction for more!

For this musicologist and author, there are good reasons to believe that Carnatic music matters, perhaps more than ever and almost anywhere in the world. So why not perform and teach it in the service of better education for all, for ecological awareness or in order to promote mutual respect in spite of all our differences? And in the process, get “invigorated and better equipped to tackle the larger issues at hand”.

To sing just with the tanpura has been revealing: TM Krishna

They had collaborated earlier for Margazhi Raagam, which was a first-of-its-kind Carnatic concert film and now, singer TM Krishna and filmmaker Jayendra have come together for One, a film that they say will be a peep into a musician going through the process of creativity. The two reveal how the project came to be, the challenges they faced and what it means to the viewer. […]

TM Krishna: To be able to sing just with the tanpura is the most revealing thing for me as a singer. It is the most beautiful way to discover music without becoming dependent on the pakkavadhyam or the mic. There is nothing to protect you. It was a very emotional and intimate experience for me. That depth of my experience is revealed in the film. […]

Source: To sing just with the tanpura has been revealing: TM Krishna – Times of India

Widely varying styles have an equal place under the Carnatic umbrella. Is it at all possible to define a single aesthetic for a genre that ranges from the thrilling and electrifying rhythms of a Trichy Sankaran accompanying the late Semmangudi Srinivasa Iyer singing the Tyagaraja masterpiece Dinamanivamsha, to the subtle rendering of a padam by the late T. Brinda? Such contrasts, though they do exist in a genre like Hindustani music, are always less stark. […]

One common aspect of such artistes who were perceived as highly aesthetic in the earlier days of amplification is the scrupulous attention they paid to shruti shuddham or toaligning themselves perfectly to pitch. Arguably, such scrupulous attention to pitch alignmentmay well have had the effect of mitigating the jarring impact of imperfect amplification. Even where there’s a great struggle to maintain shruti shuddham, an exquisite secret leaps out of old recordings of ageing masters who had lost control of their voices. That secret is the pride of place they accorded the tambura and its overall audibility. The aesthetically pleasing aura created by a sonorous and meticulously tuned tambura has a way of gently embracing a singer’s shruti lapses and folding it into the overall sound. Unfortunately, the exact opposite is feared and hence a tendency to relegate the tambura, whether a real one or electronic, to de facto inaudibility for the audience. This only exacerbates the listener’s perception of a lack of shruti shuddham.

Art, as it is normally understood, is first and foremost sensual and emotional before anything else, but Carnatic music has always been seduced by the intellect, resulting in anything from a mild flirtation to a torrid affair. The intellectual, even in musical contexts, need not be disdained but it certainly challenges conventionally held notions of aesthetics. More importantly, such intellectual music may not suffer as much at the hands of bad audio as conventionally aesthetic music, and hence, could induce stagnation in the evolution of better sound. […]

The emotional in the art is what is referred to in the Carnatic world as bhava. Bhava comes from many aspects of Carnatic music but its most serious claimant is the repertoire itself. The bedrock of Carnatic music is its repertoire – the intensely bhava-laden compositions of great masters. The remarkable vibrancy and sustainability of Carnatic music compared to some other genres come from bhava which is certainly the crown jewel. In fact, it could be argued that this alone often compensates for the lack of other aesthetic dimensions in the overall experience. […] 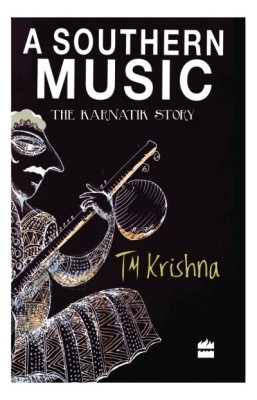 In his recent book, A Southern Music: The Karnatik Story, T.M. Krishna reflects on those misconceptions and stereotypes that stand in the way of truly appreciating South Indian music. He reiterates the unique role played by the (acoustic) tambura / tanpura which is all too rarely heard ‘live’ in Indian concerts today.

For this eminent singer “it is the one instrument that can be said to hold within itself the very essence of classical music. So unobtrusive is this instrument, so self-effacing in its positioning on the stage and so tender of nature, that it is almost taken for granted. It is the life-giver, the soul of our music. … Only a musician who has experienced this sanctity can be a true musical vehicle. In the internal absorption of the tambura’s resonance, music happens.” (pp. 48-50) He asks whether the electronic tambura satisfies the human sense of tune when digitization really changes the manner in which we hear sound, a phenomenon he has explored in practice.

In his view, the practice of substituting the tambura by electronic devices also in the classroom “has worked to the detriment of sruti. All this has consolidated the misconception of Karnatic music going ‘off key'”. (p. 235-6; see the book’s index for more on this and related topics)

Publisher’s note
One of the foremost Karnatik vocalists today, T.M. Krishna writes lucidly and passionately about the form, its history, its problems and where it stands today
T.M. Krishna begins his sweeping exploration of the tradition of Karnatik music with a fundamental question: what is music? Taking nothing for granted and addressing readers from across the spectrum – musicians, musicologists as well as laypeople – Krishna provides a path-breaking overview of south Indian classical music. – HarperCollins Publisher (2013) Price: Rs. 699

It [2011] is the centenary year of the legendary Jaipur-Atrauli musician Mallikarjun Mansur. Unravelling the individual genius of the maestro is also the study of a living tradition

It is not easy to locate the greatness of Pandit Mallikarjuna Mansur and understand his relevance in our times. The life and accomplishments of Mansur unravel the various dimensions of a great tradition; it is also the act of exploring the multiple dimensions of a living community. […]

Mansur remarked quite often that the drone of the tanpura became his bodhi vriksha (tree of enlightenment). He often said that he would not have had a mystical revelation of the notes had he not constantly meditated on it. He would declare: “I understood that all the notes are the manifestations of the first note sa and all ragas are the flood that emanates from sa.” In his autobiographical work, “Nanna Rasayatre” Mansur says, “Rather than a theoretical exposition of a raga, a sterling asthaayi (the basic framework) can delineate the ragaclearly and comprehensively. These days singers have little interest in mastering the valuable old asthaayis. The ragas have lost connection with their notes, and it ends up in the torture of a raga. One is not against producing new compositions. However, it is detrimental to make new compositions without knowing the form and value of traditional compositions.”

Mansur who learnt in the gurukula tradition under Pandit Neelakanta Bua, had an encounter with Ustad Alladiya Khan sahib at Sangli, the doyen of the Jaipur-Atrauli gharana; it propelled him to a state that he had never experienced until then. Mansur describes the manner in which Alladiya Khan’s music virtually mesmerised and left him speechless. Alladiya Khan’s taans and boltaans gave Mansur a new musical vision. […]

The four strings of the tambura that provide sruthi or the basic swara (pitch) for musicians are considered the life force for any melodic exercise. Fixed in jack wood to enhance the naada, yesteryear musicians were stuck to this pitch provider because there were no alternatives. […]

While many are comfortable with the electronic gadget while practising, how does it feel to have an object there on the concert stage, bereft of human touch, minus the aesthetics of the real thing?

“The digital tamburas are handy for travel, but only a compromise. It’s like decaffeinated coffee,” says vocalist Aruna Sairam.

“Digital versions are comfortable to use, but only a tambura can bring in a tranquil aura.”

“We use both to get an effect. If it is only the tambura, sometimes we don’t hear the strings resonating as an open-air ambience often drowns it, thanks to decibel levels. So a good tambura along with a digital one can strike a good balance,” says Sriram Prasad of Malladi Brothers.

Doyen R.K. Srikantan says: “We were used to visualising a stage only with the traditional tambura both for aesthetics and aural synchrony. There is an art to playing the tambura, we were told, not just wielding one. But we get dependent on those who have to play it for hours. Technology assists us to meet urban demands.” […]

Even so, visually there is something elevating about a beautifully carved tambura, with its mesmeric resonance, being plucked in perfect timing by a resplendently turned out artiste.

And if it is the main artiste who is handing the tambura, nothing matches the picture of his or her face resting against the magnificent tambura, lost in sadhana. Bits and bytes can’t beat such chemistry.