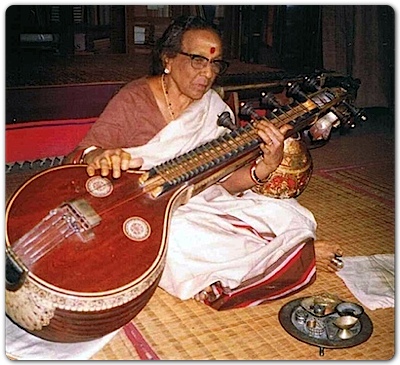 Vidya Shankar was Founder-Director of “Parampara” Association for the Preservation of Classical Carnatic Music and authored many articles and several books:

She presented numerous lecture-demonstrations in India (e.g. The Music Academy Madras) and abroad (Festival of India).

Her precise notation system for ornamentation (gamaka), one of the most difficult aspects of Carnatic music is widely acclaimed.

Among other interesting chapters, Aesthetic and Scientific Values in Carnatic Music contains a lucid summary of the 22 Sruti system (pp. 47-59, table on p. 58) with concluding remarks by Dr. N. Ramanathan (summarizing the confluence of several theories, pp. 60-61).

The following article on Vidya Shankar by writer Gowri Ramnarayan was published in The Hindu on July 21, 2006:

“Though I was very good in Mathematics, my father thought it was too strenuous a subject in college for a girl. He made me take up music instead,” says Vidya Shankar. The veena artiste is over 80 today, but the disappointment still shows on her face. Belonging to a family of extraordinary achievers (uncle C.V.Raman and brother S. Chandrasekhar were Nobel laureates; brother Purasu Balakrishnan a writer), Vidya grew up among nine siblings, all taught by the parents at home until high school. Music was part of this schedule. […]

However, little Vidya got 12 years of training from the master. “He would sing, I’d follow on the veena. He had a scientific mind, he analysed ragas with confident precision.” Once Musiri Subramania Iyer happened to be present in the class. The next day he brought a tambura for young Vidya’s Begada.

Sabesa Iyer did not fail to arrange regular tuitions for the girl with Madras Sabapati Iyer. Musicologist T. L. Venkatrama Iyer too taught a few advanced learners in her home. The guru noted that the girl corrected on her veena even those phrases, which the voice sometimes sang imprecisely. “If you have doubts, ask Vidya!” he would say happily.