One of the earliest attempts to make the British appreciate Carnatic music was initiated by Gayan Samaj.

Had the Madras Jubilee Gayan Samaj been around, it would have been 125 this year, though it began at least four years earlier under a different name. That certainly makes it the mother of all Sabhas that have been documented in the 373 years of Chennai.

The Samaj came into existence at a time when the British were taking an active if short-lived interest in Indian music. Books were being written, some of the early works being ‘Hindu Music’ by Captain N.A. Willard, ‘Musical Modes of the Hindus’ by Sir William Jones, ‘Sangeet’ by Francis Gladwin and ‘Oriental Music’ by W.C. Stafford. The absence of any form of documentation and the native methods of notation proved to be a major deterrent. The educated Indians began to seriously work on reducing Indian music to the Western form of notation often referred to as Staff Notation. It was their view that getting their music written in the Western format would encourage the English to appreciate the art form. Among the earliest such attempts were made by the Poona Gayan Samaj, one of the early organised bodies to sponsor music performances. […]

The Samaj also reduced some of its songs to Staff Notation and had the Madras Philharmonic Orchestra render them for Europeans on yet another occasion. In addition, it had Tennyson’s Ode to Queen Victoria translated into Sanskrit, set to music and performed for the benefit of an invited audience. […]

The Samaj came into existence at a time when the British were taking an active if short-lived interest in Indian music.

[Bold typeface added above for emphasis]

The music of South India or Carnatic music is an amalgam of regional traditions and practices and became increasingly codified in the past five centuries. Today it reaches global audiences while ancient roots are claimed even by those who cherish its association with musicians from other cultures – from Messiaen to Menuhin, from jazz to rock-fusion – throughout the 20th century. But how to account for its intrinsic qualities in a manner that makes sense to “non-Indian” ears and minds? More >>

Title of the presentation by Manickam Yogeswaran & Ludwig Pesch: “Unity in diversity, antiquity in contemporary practice? A fresh look at South Indian music”

I joined Kalakshetra in 1968 to learn Carnatic music. It was there that I met Rajeswari. It was a great event in my life as I came to realise more and more. Rajeswari, along with her music, is the central figure in my book titled Il raga che porta la pioggia (The raga that brings rain) describing my first stay in India 40 years ago.

As a teacher she was totally different from the elderly gentleman who first taught me to play the veena. He was taciturn, introvert, and did not correct my fingering, so much so that I had to stand behind him to observe how he played. Rajeswari Amma (later, as our friendship grew, there was no need for the ‘Amma’) was extrovert, she immediately caught hold of my fingers to correct their position. She was a remarkable teacher, playing a passage again and again, insisting on my repeating it till I got it right. She saw my deep involvement in Carnatic music, and knowing that I would not be staying very long in India, taught me difficult pieces, like the Viriboni varnam in the wonderful Karaikudi style, with all the gamaka-s possible. I had not learnt the subtleties while learning to sing it in a class for beginners at Kalakshetra a few months earlier.

At first Rajeswari Amma was very severe, paying no compliments on how I played the Veena. I remember once when I managed to play a passage very well and she reacted with a cool “Correct”. In later years, however, she would ask me at times to sing to her students, pieces that the great Turaiyur Rajagopala Sarma had taught me – Tyagaraja’s Seetamma mayamma (Vasanta), or Seetapatey (Khamas). In course of time, I became a member of her family. […]

To me Rajeswari was inconceivable without the veena. Hearing her play the listener would be reminded of her great-uncle Karaikudi Sambasiva Iyer. Sometimes she sang, matching the veena so perfectly that you were not sure who was singing – the veena or she! […]

The unique Karaikudi tradition has not come to an end, for Rajeswari’s daughter, Sreevidhya, is continuing the tradition. Back in 1969 Rajeswari did not accept the ‘mike’ (as the pick-up was then known). Playing on her veena she said, “This is the sound of the veena, and not a nasal nonsense.” Like her mother, Sreevidhya too keeps away from a ‘technologised’ veena. And her sons Kapila and Sushruta, still children, are immersed in the veena. Watch out for the Karaikudi Brothers of the 21st century! 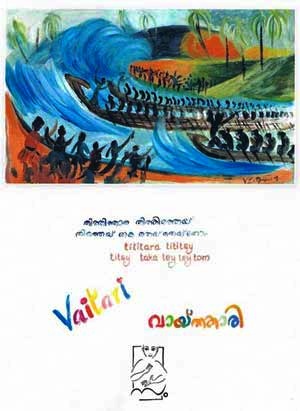 Vaitari: A musical picture book from Kerala by V.C. Arun with an Introduction for educators and parents by Ludwig Pesch

Making studies as pleasant as music
Review by A. Sangameswaran

Two musicologists of international repute are on an innovative mission to educate music lovers across the world about the intrinsic value of Carnatic music as a potential tool for education and blending cultures.

The Indo-Swiss research project, titled “Sam, reflection, gathering together,” is being executed jointly by Emanuel Wuethrich and Ludwig Pesch, in association with Natana Kairali at Irinjalakuda. […]

Their experiments to use Carnatic music for educating students with varying capabilities across the world have yielded remarkable results too.

They conducted joint programmes in different parts of the State to share their teaching and learning experiences.

They say that there is ample scope for introducing some of the Carnatic music lessons in classrooms, adult education and also rehabilitation programmes for the physically and mentally challenged.

Preserving a rich cultural tradition
The Indian education system boasts of a past where knowledge was imparted to the next generation by word of mouth. To pass on the teachings of various art forms, the masters devised various techniques.

One among them is rhythmic syllables or phrases called Vaaythaari. These rhythmic phrases, in the case of percussion arts, are construed in such a way that their recitation resembles the sound generated by the instrument, be it the chenda, maddalam, mizhavu, mridangam or edakka. […]

Professor Immanuel Wuthrich, a musicologist at the Bern University of Arts (Switzerland), and Ludwig Pesch, a musicologist and Indologist, have documented this system. Under the joint auspices of the Bern University of Arts and Natanakairali, Irinjalakuda, a workshop was conducted two years ago at Irinjalakuda on the intangible aspects of oral traditions. […]

In the workshop that followed, a lecture-demonstration by Nirmala Panicker on the incorporation of rhythmic syllables in Mohiniyattam, an oral exercise by Vayali, a class by P. Nandakumar on the rhythmic phrases and patterns used in playing the edakka and the mridangam, a demonstration by Kalanilayam Prakasan on the phrases used in maddalam and a painting class by V. C. Arun were included. […]

The organisers hope that the workshop will help create awareness about Kerala’s rich folk art culture.

The Small Theatre (Tamil Sittrarangam) is a chamber auditorium specially designed for Indian performing arts. Based on rural architecture, it provides a congenial atmosphere for traditional performers of dance, music and folk arts, and their audience alike.

Beautifully and very imaginatively conceived. India needs theatres of this kind in every village.

Goverdhan Panchal, Emeritus Instructor of Scene Design at the National School of Drama and author of books and articles on traditional Indian theatre

Contents
1 Introduction
2 A small theatre for Chennai
3 A theatre for all
4 Historical and social aspects of Indian performing arts
5 Access to the living arts
6 Sittrarangam and traditional Indian theatre architecture
7 Sittrarangam: model for a facility serving cultural tourism
8 About the plates and their context
Plate 1 Open-air stage (‘Tiger Cave’) near Mamallapuram
Plate 2 Kuttambalam stage (Irinjalakuda / Kerala)
Plate 3 Interior of Sittrarangam (Island Grounds / Chennai)
Plates 4, 5 and 6 Sittrarangam: phases of construction
Plate 7 A South Indian vocal recital by Mani Krishnaswamy
Plate 8 A leather shadow play by S. Seethalakshmi
Plates 9 and 10 Dance performances by Archita and Satyajit
Plate 11 Living theatre: Terukkuttu and Kattaikkuttu
Plates 12, 13, 14 and 15 The Sittrarangam experience
Appendix 1 A theatre according to the Natya Shastra in the IIT Madras
Appendix 2 Postscript to the IIT project description
Appendix 3 In search of an Indian theatre by Ludwig Pesch
Appendix 4 A Chamber Theatre for the Performing Arts
Appendix 5 Personal comments (Visitors’ Book 1987, 1988)
Acknowledgements
About the author
Bibliography

Sittrarangam is discussed in the chapter on Indian theatre architecture together with Kalakshetra and Kerala Kalamandalam in:
The Oxford Companion to Indian Theatre edited by Ananda Lal (New Delhi: Oxford University Press, 2004), pp. 18-19
http://www.worldcat.org/oclc/470139309

€ 22.50 (incl. postal charges) within the Euro-zone by bank transfer; bank details on request

€ 25.00 (incl. postal charges) or equivalent in other currencies outside Europe via PayPal in favour of:

(currency conversion is made during PayPal payment) 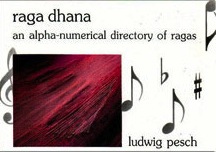 The art of vocalization of rhythmic patterns (Konnakkol) … and its importance as a memory aid and a teaching requisite have been duly highlighted … easy to comprehend. … useful for familiarisation with the various rhythmic embellishments used in percussion solo … excellent and free from errors.

The guide to pronunciation is easy to follow. The efforts of the authors to make the techniques of South Indian classical percussion more approachable certainly merit appreciation … will kindle the interest of those who want to know more about the nuances of percussion. – THE HINDU (Book Supplement, 17 December 1996)